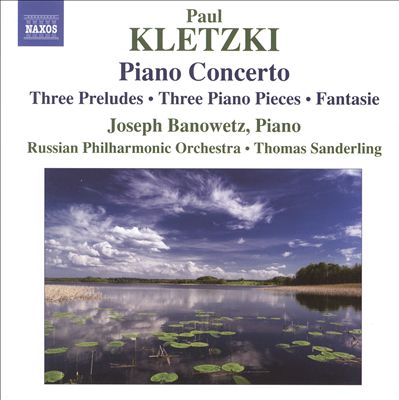 In 2010, Joseph Banowetz was honored with his second GRAMMY® nomination for this, his latest recording. This CD features the piano works of composer Paul Kletzki, with Thomas Sanderling conducting and the Russian Philharmonic Orchestra (Naxos label).

Treated “like a son” by Wilhelm Furtwängler and admired by Toscanini as both composer and conductor, Paul Kletzki was active as a composer between 1921 and 1942, relinquishing this creative outlet to become famous solely as a conductor. All the works on this disc are adventurous, sometimes improvisatory, tonal pieces which push the pianist’s technique and musicianship to the limit. The Fantasie is a colossal work of highly contrapuntal music, a sonata comprising four movements joined together within a single continuous movement, while the Piano Concerto may be counted among the most significant twentieth-century contributions to the genre.

Pianist Joseph Banowetz, described as “a giant among keyboard artists of our time” (Fanfare Record Review), continues to create excitement and receive accolades wherever he performs. With an extensive career taking him to over 35 countries worldwide, he has appeared on stages for audiences both large and small alike. Often referred to as one of the “Three Bs” for his performances of Liszt (the other two being Jorge Bolet and Alfred Brendel), this incredibly gifted and imaginative pianist’s career has spanned over forty years. “A superb job all around, and strongly recommended.” (Jerry Dubins, Fanfare Record Review)

A graduate with a First Prize from the Vienna Akademie für Musik und Darstellende Kunst, Joseph Banowetz studied with the renowned Carl Friedberg (who was himself a pupil of Clara Schumann) and also with György Sándor (a pupil of Béla Bartók). In 1992, this exceptional artist was awarded the prestigious Liszt Medal by the Hungarian Liszt Society in Budapest, in recognition of his outstanding performances of Liszt and the Romantic literature.