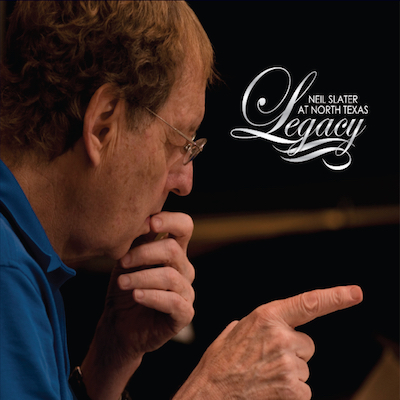 Legacy—Neil Slater at North Texas is the newest release by the North Texas Jazz record label at the University of North Texas College of Music. The 4-CD boxed set contains the complete recordings of all compositions and arrangements by Grammy-nominated composer Neil Slater written for and recorded by the UNT One O'Clock Lab Band, plus a Grammy-nominated tribute piece composed by Rich DeRosa, 38 tracks in all. A 160-page book is included as part of the boxed set, featuring hundreds of photos and notes by band members, colleagues and friends. This landmark historical compilation honors the legacy of Neil Slater, the longest-tenured director of the world-renown One O'Clock Lab Band.

Disc Three: The 2000s
Domain
Response
This
That
Look
Places
Both
Call Waiting
Side Effects
Separately Together

Disc Four: A New Era
Another Other
Time Sensitive
Not Yet
Special Interests
3rd & 55th
Will or Would?
Neil